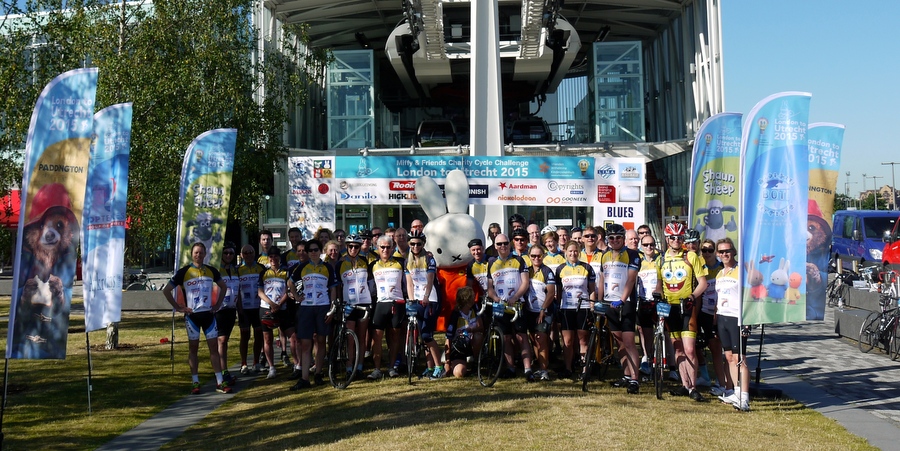 300 miles, 40 degrees heat, thunder, lightning, rain, hail, ferry delays, police escort, flat tyres, a few falls and a fractured elbow, the trip was full of drama, and exhausting. But so worth it! The UK riders raised over £60,000 for the licensing industry’s charity, The Light Fund, whilst the Dutch contingent (less in number) raised 27,000 euros for the Wilhelmina Children’s Hospital in Utrecht.

Conceived by DRi’s Anthony Temple as a fund-raising idea to celebrate Miffy’s 60th anniversary and exploit Miffy’s promotional role as the face of the Grand Depart in Utrecht, this was the first trip of its kind for the licensing industry. Here’s Alison’s account of what happened:

We left at 8.30am, cycling under a colourful industry-sponsored start banner beside the Emirates Cable Car by the O2 in London. We arrived in Folkestone 10 hours later having cycled 80 miles in temperatures of 35 degrees.

Along the route we negotiated morning rush hour across the urban sprawl of south east London, with some hairy moments which included four people hitting the tarmac, thankfully only with bruises, and with me succeeding in getting lost en route for an hour by Bexley Bus Station.  Not a great start!

In the afternoon, the group split into two pelotons according to speed (I was in the slow one, no surprise there) and we were soon riding through the beautiful Kent countryside, but boy, the hills were mean and it was getting hotter. We eventually arrived at our hotel in Folkestone, totally exhausted.

In a bid to avoid the French striking lorry drivers, we were up at 6.30am and by 8am were struggling up the last but by far the longest and steepest hill of the trip, on our way out of Folkestone to Dover. After a lot of hanging around in the hot morning sun, we managed to board a ferry to Dunkirk – a two hour crossing – time for some much needed R&R. 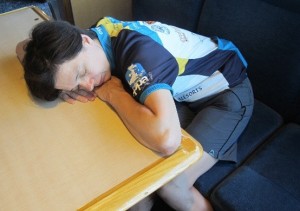 Once in Dunkirk, the lorries threatened to block our way out of the port, but after an hour’s delay by the side of the road in blistering sun with no shade, a police escort took us past the blockade, and we were finally on our way to Bruges. 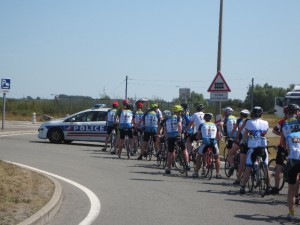 The roads were now flat, but we still had 5 hours (70 miles) of cycling to do, and the temperature was 40 degrees – the hottest on record! It was time to dig deep, and keep hydrated. Consumption of energy bars was high. People were pouring bottles of water into their helmets to cool down. CPLG’s Stephen Gould’s pack of jelly babies had turned to liquid. Heat stroke was setting in for some, and the organisors were close to aborting the ride.

But with frequent breaks, and some people hitching lifts in the van, we eventually all made it to the hotel at 9.45pm, 13 hours after we’d left Folkestone.  Writing the daily blog for Licensing Biz that night was a long process…my brain was dead.

Surely the weather would be kind to us today? It was definitely cooler as we left Bruges, and the morning saw us cycling through the Belgium countryside, beside canals and long lines of poplar trees. Apart from racing over cobblestones in some of the quaint towns en route, the morning was relatively smooth and we were all in great spirits as we arrived for lunch at the Dutch Deltaworks in Zeeland.

However, little did we know a thunderstorm was brewing. Within minutes of getting on our bikes after lunch, the thunder rolled, lightning flickered, hail stones stung our cheeks and the heavens opened. My cycle shoes were like mini swimming pools, and I was wobbling dangerously about in the gale. What on earth had I signed up for, I asked myself?  Soggy in lycra, we struggled on across the endless causeway, which spans one of the dams built to keep out the North Sea. With waves crashing on one side, a huge expanse of lagoon on the other, and a strong cross-wind, our bedraggled peloton looked a lonely site in this vast, exposed and desolate landscape.

Eventually the storm blew over, we dried out, and continued on our way, but all of us were weary and the falls started to happen. Unfortunately Becky Coles from Gemma came off the worse, with a knock to her elbow, which was confirmed later to be a fracture. Once at our hotel in a marina complex by another lagoon, some people went for a quick swim, while others headed straight to the bar. By dinner, spirits were high again, and the group was starting to feel the end was in sight.

The best day by far, we had just 60 miles to cycle to Utrecht through stunning Dutch countryside. 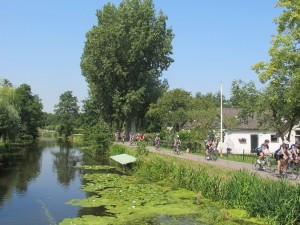 At times it was like being in an Impressionist painting with sun reflected in the canals, willow trees swaying in the breeze, and old fashioned windmills along the route. 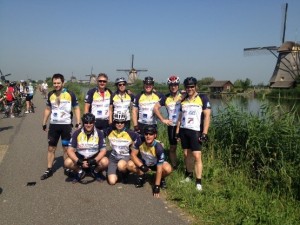 After lunch at a pancake restaurant, it was just a short 30 miles to Utrecht. Excitement for the Grand Depart was building as we neared the city, with locals cheering as our peloton passed. As all 43 of us rode together into the grounds of the Wilhelmina Hospital, we were given a fantastic welcome from a large crowd, including local press, UK licensing press, hospital staff and the mayor of Utrecht. We’d done it! We all felt an incredible sense of achievement, and a special bond amongst the group. 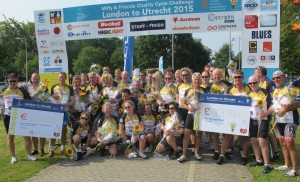 After a quick change at our final hotel, we went straight to an amazing party hosted by Mercis in a converted factory outside Utrecht. With the Dutch beer flowing, and a great live band to entice us onto the dance floor despite exhausted legs, the atmosphere was euphoric! We had plenty to celebrate…into the early hours.

The next day we headed to the house of Mercis’s MD, Marja Kerkhof, for a relaxed brunch before spending the afternoon watching the Grand Depart time trail. The whole of Utrecht had turned out onto the streets and the mood was jubilant. Miffy was everywhere… in shop windows, on posters, and flags. Live music and beer tents were set up all over the city. We watched over 100 cyclists go past…very quickly. 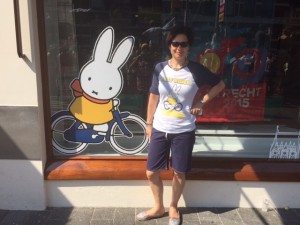 It was still hot though…residents were hosing the crowd from their houses, whilst others were sitting in paddling pools on the pavement. 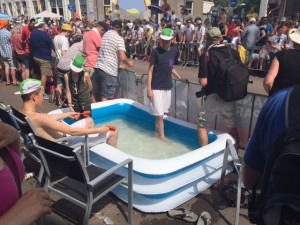 The following day, we were right up close to the full peloton as it rode out of the city on its way to start the first stage.

We then visited the Centraal Museum to see the wonderful 60 Years of Miffy exhibition, plus one of the Miffy art parade statues, before heading back to the UK. The whole trip was an amazing experience with some great people…I will never forget it! 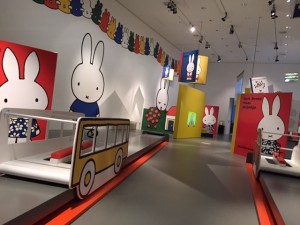