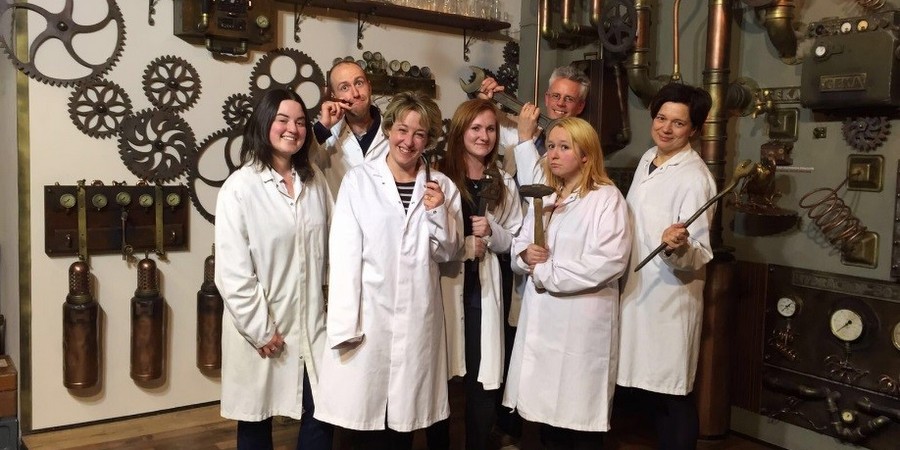 To celebrate a number of successful weeks, Team Highlight headed into Bristol for a team building exercise (and a bit of good old fashioned fun!) at Locked in a Room.

We were briefed in and quickly got into the mind-set of our characters: ‘respected scientists that were working on secret government funded projects in laboratories located in an abandoned warehouse around the Docklands of Bristol.’

We were told that “one of the scientists, Professor Samuel Pottenger, had been dragged kicking and screaming along the corridor by unknown armed assailants.” Apparently this Pottenger chap was supposed to be a “very level headed man of immense intelligence and absolutely not one prone to an emotional outburst.” Now it was time to discover the secret he was hiding!

Highlight and three other competing teams were then presented with identical ‘escape rooms’ scattered with many, many clues. With more team members on the Highlight side and 60 whole minutes at our disposal, we thought we had this in the bag. How wrong we were.

Spurring us on was the revelation that once a team had ‘escaped’, they could watch the others on a monitor. That sounded like a lot of fun to us. With that in mind, we went in ‘with brains blazing’ to solve the cryptic puzzles and clues to help us escape.

What we lack in room-escaping abilities, we make up for in PR and social know-how!

When the buzzer went out, signalling the end of our failed attempt, we were just one clue away from a victorious escape.

Still, the defeat didn’t stop us from posing for a very special team photo at the end of the proceedings. A fun team night out, and a reminder that we shouldn’t give up our day jobs just yet.