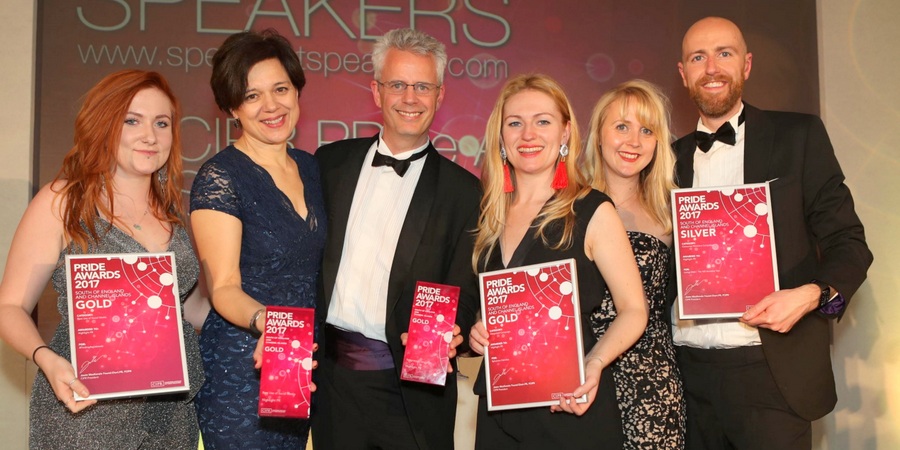 Team Highlight celebrated a triple-header of award wins at the 2017 South of England and Channel Island Pride Awards on Friday night – including winning ‘Best Use of Social Media’ for the third year in a row.

Organised by the Chartered Institute of Public Relations (CIPR), the PRide event saw the best in-house, agency and public-sector communications teams from across the South of England gather at the Mercure Bristol Grand Hotel to celebrate the most successful and effective campaigns from the past year. Over 950 entries were received, with winners selected by an independent panel of industry experts.

We were delighted to collect the Gold award for ‘Best Use of Social Media’ for social campaign activity for global craft brand Aquabeads. Kicking off with #FindingAquabeads, a digital treasure hunt across iconic London landmarks to promote the brand’s Disney Finding Dory range, we then devised a series of monthly interactive games with quirky hashtags to capture fans’ attention, generating memorable social ‘moments’ to drive engagement and 121% community growth.

A second Gold award was collected for ‘Best Integrated Campaign’ for our ongoing work for Sylvanian Families, championing the popular children’s character brand with a multi-platform campaign that focused on visually-engaging content, nostalgic social activity and quirky PR stories to resonate with original fans and attract younger new fans.

We also won a silver ‘Consumer Relations’ award for the launch of Living DNA as a challenger brand within the crowded global DNA ancestry market. By focusing on Living DNA’s personal roots and scientific grounding, Highlight secured widespread coverage across national, regional, business and genealogy press for the ‘HD ancestry test’, with over 140 pieces of coverage in the first year alone.

“The CIPR PRide Awards are one of the region’s top honours for PR and social media, so to come away with three awards this year is very satisfying. We place results at the heart of everything we do at Highlight, and it’s always rewarding when our work is recognised on this kind of stage.”

This latest success at the CIPR PRide Awards follows on from Highlight collecting four industry awards at the PRCA DARE ceremony in Bristol this past summer, including being named ‘Small PR Consultancy of the Year’ for the second straight year.